A single-phase full-wave bridge converter utilizes four SCRs or thyristors. The load is of RLE type where R is the resistor, L is the inductor and E is the load circuit emf which may be due to a battery connected in the load circuit or due to the back emf of a DC motor.

The figure below shows a circuit diagram of a single-phase full converter with RLE load where the four SCRs are T1, T2, T3 & T4.

In the full converter circuit, a thyristor pair is triggered at once. Here T1 and T2 are simultaneously triggered and after a time interval of π radian thyristor pair, T3 and T4 are triggered. The cycle is continuous.

The Waveform of Single-Phase Full Converter with RLE Load

The figure below shows the waveform of a single-phase full converter with RLE Load where load current io is continuous.

During this period T1 and T2 are forward biased whereas for the continuous load currents the thyristors T3 and T4 are already conducting.

At ωt=α, thyristors T1 and T2 are triggered and forward biased thyristors T1 and T2 start conducting. At this instant when T1T2 goes in conduction mode, a voltage Vm sin α  appears across T3 T4 as a reversed biased voltage. Hence, T3 T4 gets turned off by natural or line commutation. The load current was being transferred from T3 T4 to T1T2.

At ωt=π+α, forward-biased thyristors T3 T4 are triggered and T1T2 gets turned off by natural or line commutation. Similarly, the load current i­o gets transferred from T1T2 to T3 T4 and T3 T4 conducts for π radian of time i.e. from between ωt=π+α to ωt=2π+α.

The maximum reverse voltage that appears across the thyristors = Vm

During the time 0 to α, supply voltage VS is positive but supply current is negative as power is negative so some of the energy from load gets returned to the supply. During time α to π, both voltage(VS) and current (iS) are positive, hence the power is positive and this positive power is supplied by the source to load.

Similarly, the expression for the RMS value of output voltage is

Here, the RMS value of output voltage is equal to the supply voltage (VS).

For firing angle greater than 90o i.e. α>90o, the converter works in inverter mode where the output voltage Vo is negative.

In the load circuit, emf E is reversed such that it will supply power back to the source and the operation of a single-phase full converter for α>90o is termed as inverter mode of operation. In other words, it is also known as a line-commutated inverter.

Waveform for Inverter Mode of Operation

The figure below shows the single-phase full converter in the inverter mode of operation.

As observed from the waveform, for time duration 0 to α, supply voltage (VS) is positive, and supply current (iS) is negative. Hence power flows from load circuit emf (E) to the ac source.

Both supply voltage and supply current are positive from α to π, therefore power flows from the ac source to the load.

Here, net power flows from the load circuit to the ac source as the time duration of negative power is greater than that of positive power i.e (π-α) < α.

The output currents are positive as thyristors are unidirectional devices so current flows in the same direction when these thyristors are forward biased.

For single-phase, full converter, circuit turn off time is given by

The figure below shows the circuit diagram of a single-phase full converter with an R load.

The Waveform of Single Phase Full Converter with R load

The figure below shows the waveform for R-load only.

The thyristor T1T2 are triggered at ωt = α and conducts up to ωt = π. After ωt = π, supply voltages get reversed and T1T2 gets reverse biased and hence gets turned off.

The average output voltage Vo is given by

The RMS value of output current Iorms is given by 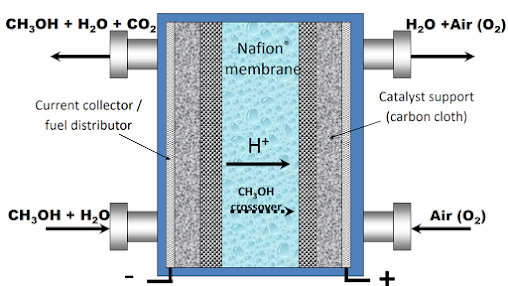